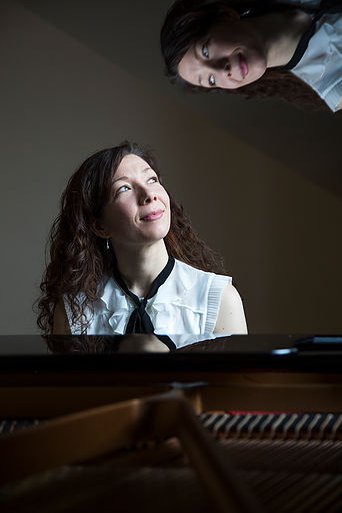 "an unexpected delight, and a festival highlight."

"a stylish, colourfully orchestrated piece, its quiet, twitchy first bars the prelude to the titular 'surge' of energy"

The music of prize-winning Scottish composer, collaborator and music educator Claire McCue has been performed across  the UK, as well as Internationally, and has been broadcast on BBC Radio 3 and BBC Scotland. She is currently based in her hometown, Glasgow.

I am delighted to share the recording from the recent premiere of my double trombone concrto "In Pursuit", featuring soloists Dávur Magnussen (RSNO) and Simon Johnson (BBC SSO) along with Edinburgh Contemporary Music Ensemble, conducted by Gordon Bragg. Thanks to Tim Cooper for therecording/editing work. Listen in my soundcloud on this page...

Just finished the song cycle "The Wee Folk & the Big Folk" for the choir. Fingers crossed they will still be able to perform it this summer but who knows!

Sadly, the premiere (originally April) of the NYCoS Girl's Choir piece has been cancelled in the light of current evernts. But best we all keep safe, and something to look forward to in the future.

Feeling very grateful for the wonderful review in the Scotsman of both my double trombone concerto premiere on 11th January. READ HERE:

New commission from National Junior Choir of Northern Ireland for a song cycle for their summer concert 2020, based on Northen Ireland's legends/landmarks including the giant's causeway! Wee trip to Belfast to takein the sights and get some inspiration!

Confirmed... New double trombone concerto to be premiered with with Edinburgh Contemporary Music Ensemble in January 2020!

August 2019: Looking forward to getting started soon on a new commission for NYCoS National Girl's Choir...

August 2019: "Kneeling"  (SATB & clarinet) will be performed again by The Choir of Old Saint Pauls and clarinettist Calum Rbertson in their fringe concerts.

May 2019: Delighted to have been shortlisted again for the New Music Scotland Awards, 2019, in the chamber music category. Congratulations to James Dillon, the winner!

May 2019: Brilliant performances of three of my children's songs, by RSNO Junior Chorus Preliminary and training choirs at their 40th Anniversary concert in the Glasgow Royal Concert Hall! I loved seing all the young singers enjoying them so much :)

May 2019: Brilliant performances of three of my children's songs, by RSNO Junior Chorus Preliminary and training choirs at their 40th Anniversary concert in the Glasgow Royal Concert Hall! I loved seing all the young singers enjoying them so much :)

May 2019: Enjoyed watching the Royal Conservatoire of Scotland's choral concert, including one of my pentatonic songs for the pre-juniors, New Auditorium, Glasgow 2019.

April 2019: Fantastic premiere and singing and choreography of my newest children's song "Rollercoaster Rde" from NYCoS youngest boys choir - your singing (and energetic choreography) was fantastic!

January 2019: I'm feeling very priviliged to have been selected to start the year on a LEAP Artist Development programme, produced by SERIOUS and supported by the Paul Hamyln Foundation. We had talks from Industry experts, delivered workshops working with  fellow artists, and set about ideas for how to use our seed funding for new project ideas. After an intense 4 days at Cats Abbey, Oxford, I left feeling exhausted, but inspired and motivated by the amazing work of other musicians and speakers.

December 2018:The talented pre-juniors choir from the Royal Conservatoire of Scotland will be singing one of my children's song "There's a Dinosaur in My Garden" in their Christmas concert at City Halls, Glasgow.

November 2018: Looking forward to performances this month in Glasgow and Edinburgh of "I Regret Your Sex" , with Juice vocal ensemble (SSA)..

September 2018: In progress... new commission for The Night With... series, composing for fantastic London based Vocal trio "Juice". Performances  in Glasgow & Edinburgh in November 2018.